ALS is short for Amyotrophic Lateral Sclerosis and is also known as Lou Gehrig's disease. ALS is a progressive neurodegenerative disease that attacks nerve cells in the brain and the spinal cord.

ALS destroys motor neurons which are responsible for sending messages to muscles throughout the body. When motor neurons die, the ability of the brain to initiate and control muscle movement is lost; muscles weaken and lose their ability to move. As the disease progresses, most muscles are affected, including those in the legs, feet, arms, hands, chest and throat. All voluntary muscle action is eventually affected and patients in the later stages of the disease become totally paralyzed. ALS is a fatal disease. 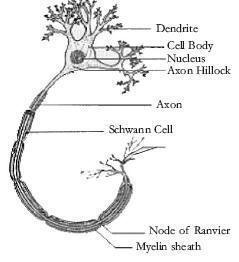 A Drawing of a Motor Neuron

ALS can strike anyone, of any race or ethnic background, at any age. Approximately 80% of cases begin between 40 and 70 years of age. ALS occurs in both sexes, although the disease is more common in men. Older people are more likely than younger people to develop the disease.

The life expectancy of a person diagnosed with ALS averages about 2 to 5 years. Many persons are living longer and more productively due to improved medical care and advances in research. Half of those affected live 3 years or more after diagnosis. About twenty percent will survive 5 years or more and ten percent will survive more than 10 years without any mechanical respiratory intervention.

The onset of ALS is insidious with muscle weakness or stiffness as early symptoms. Inevitable progression of muscle wasting and paralysis occurs in the limbs and trunk; eventually the muscles which control speech, swallowing and breathing are also affected. Excessive fatigue may also accompany muscle weakness. Some patients may start to trip and fall or lose the use of their hands and arms; others may find it difficult to swallow or slur their speech. There is no specific order in which symptoms may appear.

ALS is not rare. There are approximately 1,500 to 2,000 persons in Canada with the disease and about 450 new cases occur each year. About 90% of ALS cases are sporadic (meaning that they occur randomly throughout the population); between 5 and 10% of cases are familial, occurring more than once in a family lineage. ALS occurs throughout the world with no racial, ethnic or socioeconomic boundaries. Each year more people die from ALS than from Multiple Sclerosis (MS) or Huntington's Disease.

At present, there is no known cause or cure for ALS, although there is promising research.